Tuesday 14th January was a miserable day – wet and windy – and I wondered how many members would brave the elements to attend David Ramsden’s talk on The Barn Owl Trust. David is Head of Conservation and the Founder of the Trust, which is based in Waterleat, Ashburton. It was therefore a lovely surprise to find an almost full house and to see so many unfamiliar, as well as familiar, faces.

David started the evening off by playing the calls of three of our native owls – the little owl, the tawny owl and the barn owl. 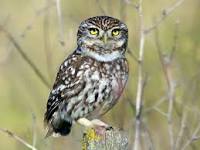 Little owls are very rare in the south-west, probably because farming methods mean that beetles, their favourite prey, are in short supply. They are most likely to be spotted in mid-Devon where the habitat is mixed.

The tawny owl is the commonest owl in the UK (we hear them almost every night in Bradley Road). They are woodland birds, highly territorial and can be found where there are big trees.

the “moon” face of the barn owl 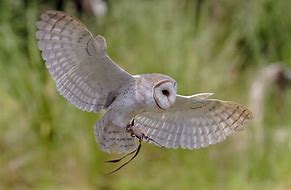 Its fight is silent and barn owls have a “memory map” which allows it to find its way around in the dark. Its home range (of about 12,500 acres) is enormous compared with the territory of the tawny (around 50 acres).

Barn owls are lowland birds and are unlikely to be found on Dartmoor. They eat mice, voles, shrews and small rats and don’t put on weight, no matter how much they eat. This can be a problem in severe winters as they can lose weight. The female lays an average of 5 eggs and incubation takes 31 days. The young fly after around 3 months and the average success rate is 2.5. Two clutches can be produced each year. All the above numbers are highly variable, depending on food supply and weather.

The young disperse between August and November and typically only one in four survives into adulthood. Owls which survive their first year of life live for an average of four years; the UK record is 15 years.
The decline in numbers is the result of modern farming techniques, changes in farm buildings, the use of rat poison by farmers, which kills the rats (also mice, voles and hedgehogs) but also anything which eats the carcass.

David asked us to report any sightings of barn owls to the Trust. Their email address is www.barnowlsurvey.org.uk