The evening began with the Chairman appealing for donation of cakes for the Spring Show, for two boilermen for the Summer Show, and for contributions for the Club website.

Robin Hill then took over and gave us a very enjoyable talk on the changes over the years to the garden in Belstone, near Oakhampton, which his parents came to from Hertfordshire in 1967. It turned out that many of her members had been to Andrew’s Corner.

Gardening at an altitude of around 1,000 feet is challenging and Robin’s policy is very much to find the right plants for the conditions.
In 1972 you would have found lots of dwarf conifers and heathers in the garden, but heathers like an open situation and as the conifers grew they created shade, so the heathers stopped thriving and were replaced.

The Hill family, Robin, Edwina and their children, moved to Andrew’s Corner in 1979 and a few years later borrowed some of their neighbour’s land for their veg garden and for grazing for their goats.

A storm in 1990 brought down 20 of their trees along with the steeple of nearby St. John the Baptist Church, Hatherleigh. Another extreme weather event occurred in the winter of 2010/11, when there was heavy snow and temperatures of below 15 deg C. 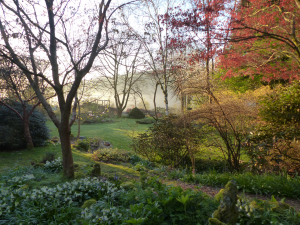 The garden in April

Andrew’s corner is normally open to the public in February for snowdrop viewing – they have over 100 varieties. An early herald of spring is also the winter aconites such as Eranthis hyemalis. 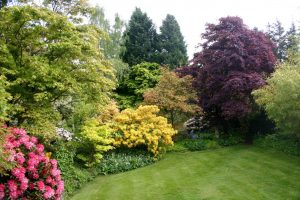 And again in May

Robin showed us a huge selection of the plants he grows, many of which prefer acid soil. (Sadly, my garden has slightly alkaline soil.) He has a particular love of acers and particularly recommends erythronium such as the lovely “White Beauty” below. 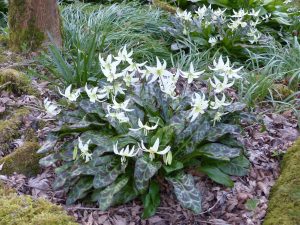 The ones I particularly liked were: Carolina spice (Calycanthus floridus), the Chilean Fire Bush (Embothreum coccineum) and the Scottish Flame Bush (Tropaeolum speciosum).

If you’d like to learn more about this interesting garden, or to visit it, you can find Robin’s website at Andrew’s Corner.