Autumn, the quietening down of nature towards the hibernation of sleepiness for the Winter, and the ever-changing charms that the seasons have unrolled become relaxed yet full of harvest and colour. Hints of gold peep through the glistening array of browns, yellows and reds. The cooling off period is upon us as the early mists creep alongside the colder nights – a warning sign of what is to come!

My Grandmother used to say ‘Autumn dries up walls or breaks down bridges’ such is the chemistry of the weather.

As most plants turn their glorious blooms to carrying on the next generation of seeds many birds gather to enjoy their offerings. The Goldfinch loves the thistle seed, and the House Sparrow oats – probably the reason these birds spend much time in the fields during the daylight hours, flying back with all their chatterings of news as the sun sets, wakening us at dawn with the busyness of leaving. 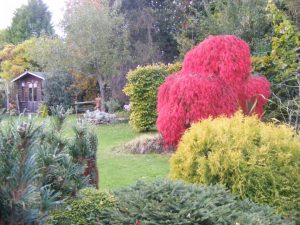 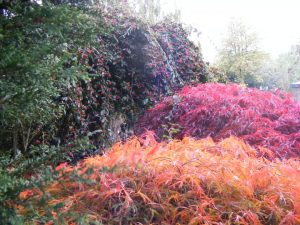 Blackberries have been in abundance amongst the hedgerows and I have spent some relaxing time gathering these fruits to stew with the apples, many of which have fallen too early letting the ‘beasties’ get to them. Never-the-less, the blackbird has enjoyed its fill, then taking a dip in the birdbath, alongside the robin, who ducks, shakes and is gone again.

Hanging baskets and tubs need deadheading continuously if we are hoping to keep them going to the first frost, unfortunately, a few of ours decided to give up in the hot weather, only the petunias surviving.

This month with the onward thinking of wetter weather to come, we are having to renew an older shrub, ‘Photinia Red Robin’, it has been part of a hedge for the last 30 years and has probably become dehydrated, so out with the old and in with the new. Grisellinia, an evergreen with shiny leaves, seems very tolerant here in the ‘Bovey Basin’ and it will fill the existing gap as it is fairly fast growing.

New Camellias, Azaleas, Hydrangea and Rhododendrons have all grown well in this area, once well estabilished. I find they cope very well on their own in the dry weather.

Giving the greenhouse a miss this year, we grew tomatoes outside, Sungold, Ailsa Craig and Tumbler have given an amazing crop and we are still harvesting them – Chutney seems on the cards!

The vegetable garden is now being tidied for winter, removing most of the old crops, the beans and peas we cut to ground level, leaving the roots as these give nitrogen to the soil once they break down.

Lets make the most of the allotted good days left in our gardens as the greenhouse will be used during the coming months for those seeking relaxation to bring new life to our gardens for the coming year.