Julian and his wife Sarah run the Desirable Plants Nursery in Totnes. Their nursery is not open to the public, but you can contact them via email (desirableplants@gmail.com). If you are on their email list they send out availability lists twice yearly.

Julian’s well-illustrated and wonderfully energetic talk last night centred on three groups of plants, Epimediums, Nerines and Anemones, plus a number of other unusual plants.

Epimediums are tough, shade-loving rhizomatous perennials found from the Mediterranean to east Asia. Julian grows 58 varieties, but in their natural habitat they do not hybridise. There are, however, many garden hybrids. 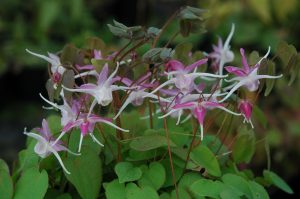 Central China has wet summers and the varieties from there need summer moisture and in your garden require some attention in their first few years. Some have attractive red spotted leaves in spring and/or autumn.

Varieties with low hanging flowers need their leaves removed if you wish to see the flowers at their best. In taller varieties such as those from China the flowers sit above the leaves. 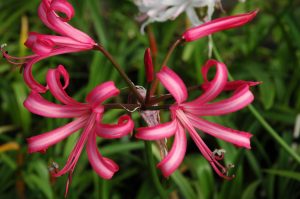 Nerine sarniensis, in contrast, is from the western Cape, where the summers are dry. They are in growth in the wet winter and are therefore tender in the cold UK winters.

Julian described a number of species of Anemone. A coronaria colonises in well-drained soil; A hortensis is spring flowering and will cross with A coronaria and A pavonina, the resultant plant being sterile. 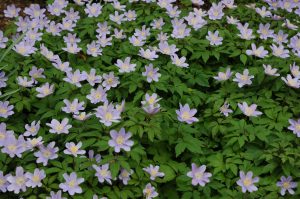 A blanda is shade tolerant (I am going to plant some in my shade garden) and A apennina naturalises in grass. Always buy wood anemones in flower, as names are often confusing and many varieties are similar.

Julian showed photos of a number of other interesting plants, such as:-

Many of our members went home with plants or seeds grown by Julian, so perhaps we will see some new and interesting entries in the 2019 Summer Show.